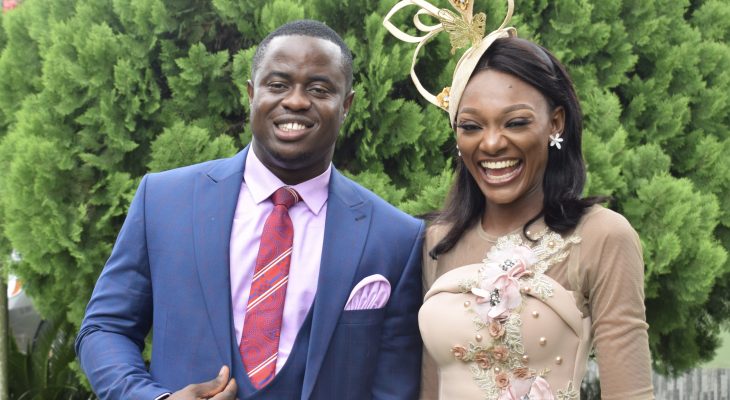 In April 2018, Promise joined the Wakaholic West African Tour where he connected with his Bride, who is my not-so-little sister. And in June 2019, they tied the knot at a colorful and culturally-rich event held in the beautiful city of Uyo in Southern Nigeria.

Promise & I work with a prestigious Law Firm in Lagos, Nigeria. In January 2018, I invited some of my colleagues including some Partners to my home on a Wakaholic Food Adventure to have a taste of Ekpang Nkukwo – one of the most famous traditional delicacies popular in Southern Nigeria for its magnetic powers of uniting family & friends.

Due to the time and patience involved in making this dish, Promise offered to come and help me prepare. To find out how to make Ekpang Nkukwo, click on this link.

Food was served and we had a beautiful evening. Promise and Abie were acquainted.

Next thing, I planned a West African road trip and Promise indicated his interest to join this trip. Abie was scheduled to travel with us too.

In March/April 2018, we explored destinations around the West African Coast  including cities in Togo & Republic of Benin, and bonded in Nature Luxury Lodge, a beautiful Eco-friendly lake-house where we cooked our own meals and interacted as a family.

Promise was particularly fond of Abie on this Wakaholic trip but I thought he was just being his usual friendly self. The trip ended, I created a Whatsapp Group to share photos from this event and Promise gained access to Abie’s phone number. They started texting and speaking to each other after our trip.

They both kept this information from me until August 2018 when Promise approached me at the office car park and reported himself. And in November 2018, Promise proposed to Abie and she said ” YES”.

As the Minister of Enjoyment and Chief-Master-Planner of my family, we started planning a wedding from January 2019. Today, I am delighted to introduce my brand new brother-in-love, and also share photos from the colorful event held on June 29, 2019 in the city of Uyo, Akwa Ibom State.

Akwa Ibom State is blessed with a rich cultural heritage. We pride ourselves in our exotic dishes largely dominated by vegetables, sea foods and domestic animals. The average Akwa Ibom girl-child is trained at a very tender age to carter for the family and this she derives pleasure in doing.

The Uruan Community which is our origin, and the Efiks both share similar social and cultural ties, hence the rich display in our royal regalia. It was indeed a beautiful and memorable event.

You can easily get into a destination’s soul through its sports teams. When you step into the feverish …
Read More

The year 2020 offers a fresh start for you on your travel adventure. There is a lot to …
Read More