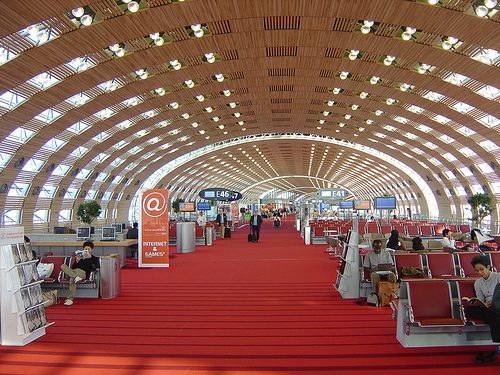 So, I had gone to ‘obodoobama’ (the USA) for a weird vacation and was on my way back with two little kids ages 2 and 6 weeks. It was a crazy day and all I looked forward to was home, after almost three months abroad.

So here I was in Paris Charles de Gaulle airport after a 9hr flight from Houston. I had to take my two year old to the toilet to change his diaper. It was a crowded ladies room and more annoying was the line of mothers waiting to use the changing room.

As a typical naija (Nigerian) babe, I used my eyes to gauge my spot on d queue and kept pacing around impatiently. After about 25 minutes, it was my turn and as I marched happily towards the entrance, a certain young lady whom I still owe ‘two resounding slaps’ walked past me into the changing room and as I politely tried to explain to her, she spoke angrily in French and slammed the door shut.

When she finally got out, I said “seriously though, I was here first”. She went on in French and I quickly switched to my local ‘anioma’ dialect. After telling her to kiss my behind and threatening to beat her up in my dialect, I felt so good, and to see the shock on d faces of everyone present was just priceless. Lol

Finally boarded the connecting flight and guess who takes the seat right next to me??? 🙁

Some years ago, I traveled to Dubai with three travel buddies, including a mother and her daughter. The …
Read More

March 11, 2015- I was at the Barbican Centre, London for my graduation ceremony from the University of …
Read More