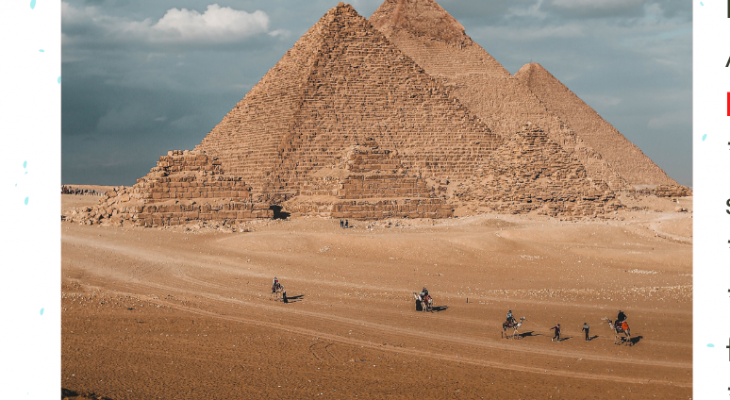 Considered home to one of the oldest and most influential civilizations on earth, Egypt is a veritable treasure trove of history and cultural heritage. Ranging from the capital city of Cairo to the Nile Delta region, the entire country is home to unprecedented sights of ancient history, including the famous Pyramids of Giza and the temple of Simbel. In addition, Egypt’s Red Sea coast is a fertile ground for relaxation, swimming, and scuba diving on some of the most spectacular and pristine coral reefs.

In this Egypt travel guide, we are going to give you vital information and basic facts about what to expect if you are planning a vacation trip to this North African Arab country.

Located in North Africa, Egypt is hemmed in by the Mediterranean coast to the north, and the Red Sea to the east. It shares contiguous borders with the Gaza Strip, Israel, Libya and Sudan, and its territory also includes the Sinai Peninsula, which bridges the gap between Africa and Asia.

Egypt has a total landmass of over 386,600 square miles (1 million square kilometres), and is twice the size of Spain.

Cairo is the capital city of Egypt, and is one of the most boisterous cities in the African continent.

According to a CIA World Factbook estimate for July 2016, Egypt’s population stood at 94.6million people

Modern Standard Arabic is the official language of Egypt, with Egyptian Arabic used as the lingua franca. The educated class, however, speaks either English or French as well.

Like most countries in North Africa, Egypt has a desert climate, with the weather generally hot and dry for the most part of the year. Temperatures, however, are much milder around the November to January winter period, while the summers can often see sweltering heat ad scorching sunny conditions. Rainfall is rare, although parts of the Nile region and Cairo witness some precipitation during winter.

The best time to visit Egypt and enjoy the weather is around October to April, when temperatures are at their most favourable. However, for those keen on grabbing those out-of-season deals on trips and accommodations, then June to September are the ideal period, although one has to be well prepared for the souring hear and humidity during this period. If you are travelling to the Red Sea, then you will not feel much of the heat, as the coastal breeze tends to cool things down quite a bit.

The Pyramids of Giza

Situated just outside of Cairo, the Egyptian capital city, the Pyramids f Giza are often regarded as the most famous of ancient Egypt’s antiquities. The tourist site is composed of the iconic Sphinx, plus three separate pyramid complexes, each housing a burial chamber of different pharaohs. The largest of the three is the Great Pyramid, considered the oldest of the Seven Wonders of the Ancient World, and incidentally, the only one still standing.

Often referred to as the world’s largest open-air museum, the iconic city of Luxor stands on the site of the ancient capital of Thebes, and is home to two of Egypt’s most fascinating temples – Karnak and Luxor. Further opposite the bank of the Niles stands the Valley of the Kings and the Valley of the Queens, burial sites of the ancient royals. Most importantly, the necropolis houses the tomb of Tutankhamun.

A UNESCO World Heritage, chaotic but colourful Cairo is the capital city of Egypt. The city is full of cultural as well as ancient landmarks, including the Hanging Church (one of the oldest places of Christian worship in the country) and Al-Azhar Mosque (the second oldest continuously running public university in the world). The Egyptian museum is home to 120,000 artefacts, ranging from mummies, sarcophagi, and the riches of Tutankhamun.

The Egyptian Read Sea coast is ideal for scuba diving and is regarded as one of the best in the world. The clear, pristine waters and healthy coral reefs make it a great place to dive. Top resorts in the vicinity include Sharm el-Sheikh, Hurghada, and Marsa Alam.

Visitors and tourists to Egypt use the Cairo International Airport. Also, there are also international hubs in important tourist locations such as Sharm el-Sheikh, Alexandria and Aswan. Most international tourists will need to get a visa to get into the country. Visitors from the U.S., Canada, Australia, Britain and the EU can get a visa upon arriving at the airport or the port of Alexandria. Do ensure to check up with up-to-date visa regulations before getting your ticket.

Apart from making sure all your routine vaccines are up to date, the Centre for Disease Control (CDC), recommends travellers going to Egypt be vaccinated against hepatitis A and typhoid. Although yellow fever is not an issue in Egypt, if you are travelling from a yellow fever-prone country, you will be required to show proof of vaccination against it.

There is your Egypt Travel Guide. To find out the best places to visit in Africa for vacation, watch the video below.