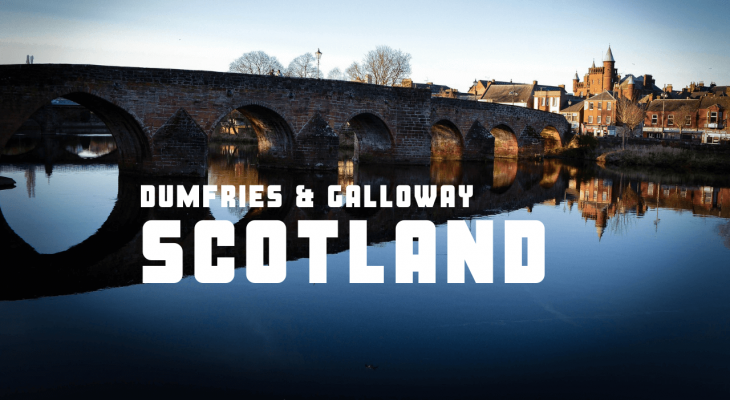 Dumfries & Galloway is a Scottish region county town steeped in rich history and offering a wide range of hidden gems just waiting to be explored. Whether you are intrigued by neolithic monuments, epic castle ruins or just curious to see the burial place of the inventor of the bicycle, this Scottish region can quench your thirst for historical knowledge.

This 13th-century Cistercian church was founded in 1192 by Rolland, the Earl of Galloway. It is situated in the beautiful valley of the Water of Luce. The site features a 16th-century chapter house and a museum, as well as an impressive collection of artefacts. Celebs who have visited the site included Robert the Bruce, James IV and Mary Queen of Scots.

Overlooking Wigtown Bay is a pair of Neolithic burial cairns – said to be the resting place of a mythical Scottish king called Galdus. The chambered tombs stand within 150 m apart and date back to the 4th millennium BC – almost 6,000 years!

Dunskey Castle lies in ruins. The ruins can be seen on the striking rocky peninsula of bay, near to the seaside town of Portpatrick. The huge tower house predates the 17th century and was built for the Adairs of Kinhilt – who also owned the Castle of St John in Stranraer, in about 1510. The site is worth visiting as there are stunning views along the coastline to be witnessed.

One of the earliest Christian sites in Scotland is Whithorn Priory. The site is believed to have been discovered by St Ninian in the 5th or 6th century. The site is a popular pilgrimage location among Christians who travel to Whithorn to see and touch the relics of St Ninian, seeking miraculous cures and salvation up till this day You can also visit the impressive St Ninian’s cave, which is approximately 7m long and 3m high.

Take a step back in history to Cardoness Castle – built by the McCulloch family during the 15th century. Learn about the interesting lives of the McCullochs while taking a walk around the six-storey building, touch the intricate stone carvings and feast your eyes on the spectacular panoramic views of Fleet Bay of the Solway Firth.

This Scottish attraction is nestled in the village of Wanlockhead, which – at 461m above sea level – ranks as the highest village in Scotland. The 18th-century lead mine, located deep in the hillside, giving visitors the exciting experience of going underground! For those with keen geological interest, the Visitor Centre has wealth of knowledge on all things rocks, minerals, gold, and local relics. You can also try your hand at gold panning here.

As the name indicates, this abbey has a romantic story. It was founded by Lady Dervorgilla of Galloway in 1273. The Abbey was dedicated to her husband John Balliol. After her death, she was laid next to Balliol’s embalmed heart, leading the monks to name the abbey in commemoration of this act.

Kirkpatrick Macmillan was born in 1812 in Dumfriesshire. The son of a blacksmith, he began working alongside his father in 1924. Later, in 1839, Macmillan would go on to invent the first bicycle – making him a local legend! Today, you can visit the Kirkland graveyard where his gravestone lays and the plaque that indicates where his smiddy was based.

A centrepiece of 17th-century renaissance architecture in Scotland, Drumlanrig Castle is as beautiful inside as it is out. Boasting 120 rooms, 17 turrets and four towers, visitors are certainly in for a treat. A day out at Drumlanrig Castle is a great experience for all of the family with 90,000 acres of estate to explore and miles of scenic walks and a number of activities to get involved with.

Burnswark is home to a native hill fort. This fort is said to be the possible site of a siege during the early conquest of Scotland. A large marching camp and a training camp on the south side were major parts of the huge fort. Roman soldiers at the training camp were supposedly sent to conduct artillery training.

Have you explored Dumfries & Galloway?

Travelling is worthwhile. However, while we hope for the best, it is wise to prepare for the worst. …
Read More

Emma is a passionate traveller and a serial entrepreneur. Here is a review of her experience travelling within …
Read More