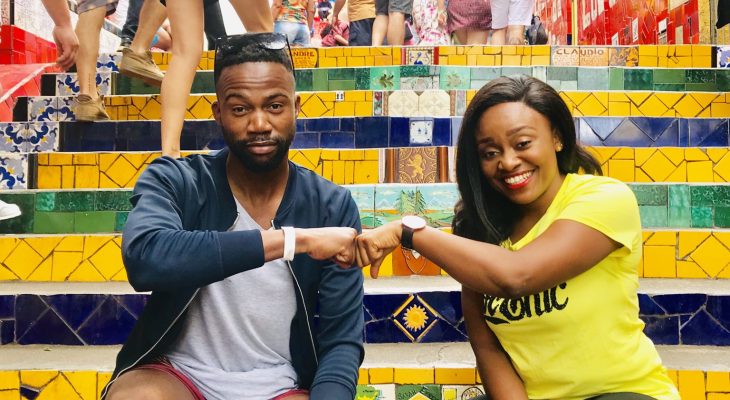 Here are some interesting facts I discovered about these famous stairs;

1. The stairs were built by Jorge Selaron, a Chilean-born Brazilian world traveler, painter, and a ceramic artist.

2. Jorge Selaron’s house was located next to the staircase. It is a location that connects two bohemian neighborhoods, Lapa and Santa Teresa in Rio de Janeiro.

3. Jorge Selaron began his work by adding blue, yellow, or green colored ceramic tiles to the stairs. This represents the Brazilian flag and became a tribute to the Brazilian people and the Brazilian football team at the FIFA World Cup.

4, As Jorge Selaron’s work became popular across the world, he received ceramic tiles as gifts from travelers that visited Rio de Janeiro. Visitors from all over the world brought tiles from their home countries for Selaron to add to the staircase.

5. Renowned artists such as Snoop Dogg and Pharrel have recorded music videos on Selaron Staircase. After this publicity, this place became a must-see for everyone visiting Rio.

6. Today, it is estimated that there are more than 2000 tiles from around 60 countries in the world.

7. Jorge Selaron died in 2013. He was found dead on the Selaron Stairs, in front of his home. His masterpiece, however, lives on. This touristic site is visited every day by people across the world. You should visit it too and keep a memorable picture of it.

8. Before his death, Jorge Selaron was officially recognized for his job. He became an honorary citizen of Rio which is an important honor for a man who dedicated 23 years of his life to building the stairs.

Have you visited the Selaron Stairs before?

Best Things to Do When Visiting Rio de Janeiro

These are lessons I learned from traveling the world. 1. Travel is never a matter of money but …
Read More

Proper planning makes all the difference between a rushed, stressful trip and a restful, worry-free vacation. And, trust …
Read More