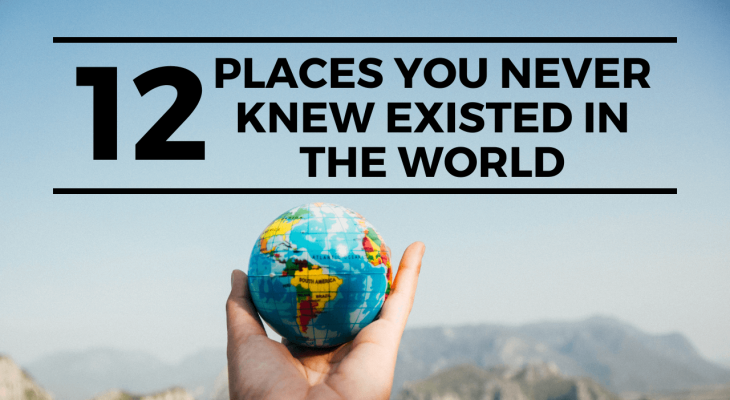 It is said that the most exciting adventures are experienced by exploring a place only visited by a few. Well, the world is full of intriguing wonders, many of which are largely unknown. Would you like to visit some of them, if you knew them?

Here is a list of 12 places you never knew existed in the world:

Fondly regarded as  Stairway to Heaven, the Haiku stairs which are comprised of 3922 steps is a dare every tourist should take. The stairs were built in 1942 to transmit radio signals to navy ships across the Pacific.

Said to have existed since the 2nd Century BC, the thermal pools which exist due to the shifting of a fault in the valley of the Menderes river have been used as a day spa since. A dip into this white-coloured hot spring which is high in mineral contents is worth it.

Get lost in the beauty of this 1375 metres crystal, a blue lake that is located among the Min Mountains of China near the Tibetan plateau.  The lake is truly deserving of it being one of the UNESCO World Heritage Sites that it is.

The Huacachina Peruvian desert oasis which is located in the Ica region of Peru and surrounded by dunes gives a feeling of being in an outpost of some sort.

The Zhangye landform which is known as the rainbow mountains is one of the most colourful landforms in the world.  Formed over 6 million years ago by the erosion of Redstone, Zhangye Danxia is a special geologic structure with a peculiar set of weathering and freeze-thawing properties. It is a must-see.

Built inside a cave located on the Italian coast and carved on a cliff’s face 20 meters above sea level, it isn’t a surprise you never knew this place existed in the world. The Ristorante Palazzese which is a stunning restaurant promises an amazing dinner with a spectacular view of the waters overlapping the shores beneath.

On top of a fierce 4000 meters hill in the faraway Himalayas, this imposing monastery which is known as the Key Gopa stands. The Key Gopa is one such Tibetan monastery, known only by a few that is worth visiting.

Hidden away 130ft underwater, Shi Cheng City which was covered with water in 1959 remains largely forgotten and unknown to most of the world. You can explore this frozen-in-time city while wondering if you are indeed in a wonderland.

This entirely flat landscape which is also the world’s salt flat (3653metres) was part of a prehistoric salt lake that once covered most of southwest Bolivia. The sight of this glistening white landscape promises an unforgettable experience.

Known as the Door to Hell or Gates of Hell, the Davaza crater is a vast molten cavity that opened about 40 years ago in the Desert of North Turkmenistan and has been burning since. It is said to be emitting poisonous gases ever since it gave way and has burned at temperatures of 1000°C since. The Darvaza crater is indeed a perfect description of the door to hell.

These Ice Caves provide the most breathtakingly beautiful landscape in the world. The ice caves which were formed from the continuous action of water for over a thousand years are a natural beauty worth exploring.

Mada’ih Salah is an ancient cave dwelling that is also the last conservation site of the Nabateans.  The caves houses hundreds of well-preserved monumental tombs which date to the 1st century BC and 1st century AD. The caves are a true representation of the Nabatean’s architectural expertise.

There you have it, a list of places you never knew existed in the World. Now you know!

As a passionate traveler, there is not one country in the world I do not want to visit …
Read More